How to Trade the 2020 Presidential Election

This article on How to Trade the 2020 Presidential Election is the opinion of Optimus Futures. This article is for general discussion, and we do not encourage anyone to trade during times that the markets could display above average volatility, high ranges, and where substantial gaps may occur. Trade at your own risk. 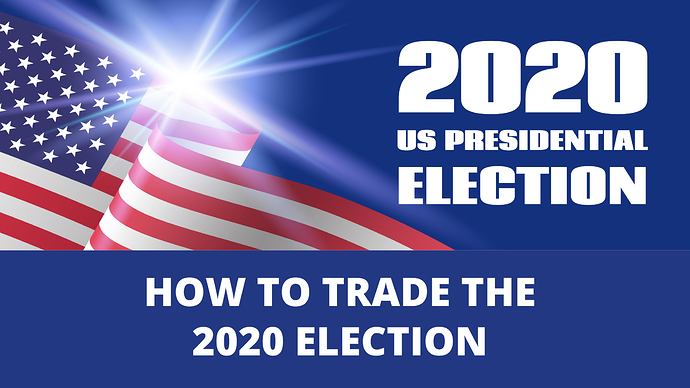 Trading a presidential election can be dicey. Dicey not because there are too many differences or factors to consider (which, to be fair, there can be), but because:1) there’s a lot of randomness that goes into such high-volatility events,

In short, investors and traders are mounting rationally-driven responses to a short-term event or long-term tenure that may not fit within a rational mold; they’re basing their market thesis on ideas that may have little to no real basis in reality; and, they’re not looking at what really drives the market.

If you want to trade the election, then it might make sense not only to go about it a bit longer-term but to look in the right areas for market indications. Think in terms of “trend”, but don’t think that the trend is obvious or even visible in the markets (more on this later). Know the longer-term bias. Most importantly, understand that the trend that eventually forms may or may not present itself right away (but is nevertheless there). Look at the underlying current, not the waves .

Before we get into the “hows” of creating a 2020 election trading strategy, let’s first dispel a bunch of myths.

Don’t Take Theory for Actuality or Rumor for Reality

Choosing One Side or Another Will Determine the Destiny of the Markets (you think so?)

It’s widely believed that the stock market might perform better under a conservative Republican administration than it would under a more liberal Democratic one. Democrats are generally known to increase taxation and federal spending on socially-driven programs; in short, “bigger government.” Republicans, on the other hand, are associated more closely with the idea of fiscal conservatism, “free markets” (if such a thing exists nowadays), and tax cuts.

Nice theory. It makes sense. How’d it play out in history? 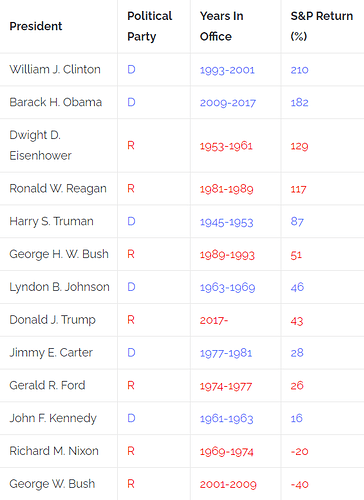 And why isn’t it actuality playing to theoretical prediction? Well, it’s obvious. Lots of other things were going on that affected the markets regardless of a political party .

So, if that’s the case, then just how powerful is the president’s fiscal hammer? It’s quite powerful. But the truth remains that other larger economic factors can dwarf it. Meaning that under certain circumstances, it may not hold much power at all, at least in terms of influencing the markets.

Then why are so many investors and traders staking so much of their money on the outcome of an election? Good question. If you can find a rational answer to that, please email us. Because whatever assumptions have been going ‘round, it sure hasn’t worked very well, at least according to history.

There’s an institution that’s far more powerful. And we’ll get to that later.

If you’re not already familiar with this “seasonality” model, here’s how it goes (from data compiled by Charles Schwab spanning 1950 to 2016): 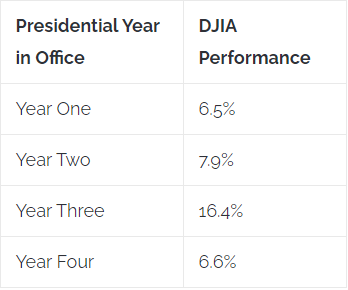 There it is. Obviously, actual scenarios will differ. For instance, George W Bush’s last year saw the Dow sinking -32%. Under the Trump administration, the first year saw 32.1% in returns, followed by a -5.2% decline, up 18.8% in year three, and right now, the Dow is up 2%.

Remember, this is an “averaging” of performance. We don’t live in the averages. Reality unfolds in the tails, and oftentimes, those tails are quite fat . So much for Presidential Cycles, right?

Historically, stock indices tend to perform well in the months leading to the election. That’s what everyone says, right? Well, that too is a bit off. 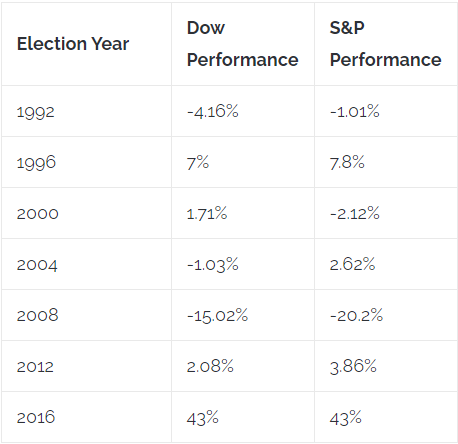 The S&P 500 and Nasdaq hit new highs this year–the year of an election–but not the Dow. The underlying current in today’s market is not so much whether Blue or Red will take office, but rather the COVID-19 spread, the Federal Reserve’s response to the pandemic, and the fiscal response to the pandemic in the form of stimulus programs. More than anything political, those are the factors that will define what happens in the markets for the next few years .

We’re Experiencing Unprecedented Circumstances – History May Not Help Guide Us

Despite the fact that the current circumstances are unprecedented, let’s go over historical tendencies anyway, for the sake of covering those expectations. Beginning with sectors: 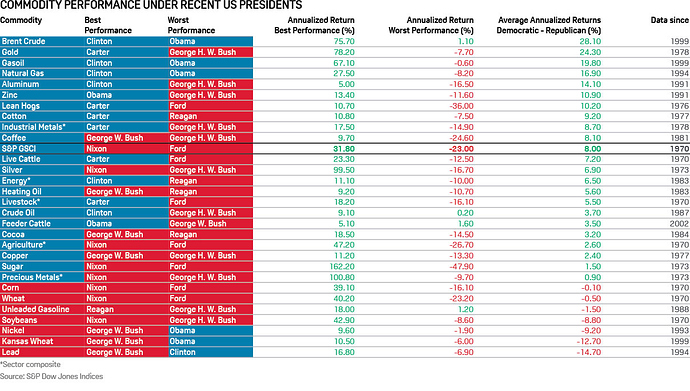 By the way, some of you may be stock traders new to futures. We’re going to talk a lot about futures for the remainder of this article. If you need to get caught up, feel free to read our Comprehensive Guide to Futures Trading in 2020. It’ll help you get started (or caught up). Now, back to markets and politics. If bipartisan politics plays a variable and potentially inconsistent role in determining market performance, then what really matters when trying to forecast and trade an election?

If Biden wins, he may inspire investment in certain sectors and industries, such as alternative energy. But he can’t sway the broader market to rally. If Trump wins, that may be especially favorable to energy and financials, but he can’t make investors feel confident about all eleven sectors and their respective industries.

But when the Federal Reserve virtually says it’s going to backstop the entire financial system by keeping rates near zero until the US reaches not 2% inflation but an “average” of 2% inflation–meaning the Fed will overshoot the 2% inflation rate until it “averages-out”–then that will likely give confidence to the markets that the Fed has its back, so to speak.

So, what do the Federal Reserve’s actions tell us about the coming election and the years to come?

So the VIX is on the lower end and rising. This VIX is popularly called “the Fear Index.” So is market fear on the low side? What you need to pay attention to is not the front month of the VIX futures but how the front month is priced against later months. Right now, the VIX is not in contango; it’s in backwardation, where the front month is more expensive than the back end months. This can mean that people are expecting high-volatility in the near-term. And when it comes to facing severe market turbulence, it’s important to know What NOT to Do When Facing Unprecedented Market Volatility.

In other words, the Fed aims to overshoot 2% inflation. More inflation means dollar weakness. This paves the way for certain assets to rise.

3 – US Indices Are Poised for Further Upside

If the Fed is backstopping the stock market, then expect broad indexes to rise. Goldman Sachs equity strategist David Kosting writes “regardless of the election outcome, we expect roughly 10% upside to the S&P 500 by the middle of next year.” (Bloomberg). JPMorgan strategists go so far as to say “don’t let the passions of this election lead you to make any key planning or investment decisions…in light of all this, one wonders: does it even matter who is president as long as we have a Fed? ”

Now, just because a market is forecasted to rise doesn’t necessarily mean that it won’t have deep corrections along the way. And if you do hold large stock positions, then corrections can be quite frightening. Perhaps that’s why you’re interested in futures, to hedge against your equities holdings. If so, check out our article on Futures Hedging Strategies to Protect Your Stocks during Market Downturns.

Think about it. What is the dollar? Well, most people would say it’s “money.” But functionally, what is money? It’s “purchasing power.” When inflation creeps up, and when more dollars are added to the money supply, the value of the dollar’s purchasing power erodes. That’s the effect of inflation. And the Federal Reserve is currently implementing a pro-inflationary framework.

What rises when along with inflation? Gold and silver . Plus, should Biden win the election, a potential boost to the alternative energy industry, silver is a key industrial component to that industry–as it’s both an industrial and “monetary” metal.

Goldman Sachs forecasts a 28% return on its S&P/Goldman Sachs Commodities Index (GSCI) over the next 12 months. Here’s a breakdown of their forecast:

Due to the expansionary nature of fiscal spending and accommodating monetary policy (which is currently pro-inflation), safe-haven demand is rising. Hence Goldman’s $2,300 price target for gold and $22 price target for silver.

According to Morgan Stanley analysts, “the market appears to be underpricing the possibility of a Blue sweep.” We just advanced the idea that the Fed reigns supreme over the coming economic environment regardless of the election. But Morgan Stanley sees opportunity in the event of a Biden win, stating that” for those who wish to position for a Democratic win, risk/reward for EM looks compelling especially in the case of a united government, which could result in sizeable stimulus and a more consistent set of economic policies,” they are looking to short the dollar against the Brazilian Real (USD/BRL), Mexican Peso (USD/MXN), Columbian Peso (USD/COP), South African Rand (USD/ZAR), and the Russian Ruble (RUB/USD).

When we think “election,” we tend to think in fixed and clunky categories: Democrat, Republican; blue, red; fiscal expansion, fiscal conservatism; big government, small government. We choose to think in binary oppositions rather than to see the bigger picture–the current business cycle and the monetary policies that exert tremendous influence on it. In a sense, trading an election is complicated simply because we’re not looking at the right signs. Hopefully, the information we provided will help you separate the hype from the “real” so that you can make decisions based not on assumption but sound reason.

There is a substantial risk of loss in futures trading. Past performance is not indicative of future results. The information contained in this site is for general guidance on matters of interest only. While we have made every attempt to ensure that the information contained in this site has been obtained from reliable sources, Optimus Futures is not responsible for any errors or omissions, or for the results obtained from the use of this information. All information in this site is provided “as is”, with no guarantee of completeness, accuracy, timeliness or of the results obtained from the use of this information, and without warranty of any kind, express or implied, including, but not limited to warranties of performance for a particular purpose. In no event will Optimus Futures, its related partnerships or corporations, or the partners, agents, or employees thereof be liable to you or anyone else for any decision made or action taken in reliance on the information in this article or for any consequential, special, or similar damages, even if advised of the possibility of such damages.

hi very informative post. my profession is trading and I know when the election was carrying trading was at risk but now I seems good impact of election for market. i usually read news from this site they also have news related to market. but this article is quite to the point.