Hi All,
I wanted to share a very simple yet rarely discussed subject of how losses (if not recovered
or at least brought back to breakeven) effect our bottom line results.

I am basically making a case study of how crucial and important is to keep the losses
as SMALL as possible and how BREAKEVEN days are little statistical “miracles”.

What’s worth mentioning is that although a trader lost only -$400 dollars in reality
the 2 examples show a difference of -$800 or 2x the actual loss at the end of the 10 days?

Why?
It is what I call Time/Loss Opportunity phenomenon.
If you have only 10 days to trade/measure results, then each day that a trader does not
meat the goal, that slot is lost in time and also if one was hoping to make +$200 but
instead one lost -$200, the difference in absolute value at the end of 10 days testing period is -$400 (the difference between the peak of +$200 and the dip of -$200).

Although simple, this reality causes many traders to overlook the damaging effect
of losses on the bottom line end results. Traders tend to literally ignore their losses and keep focusing on the next trade instead of figuring out how to either trade less, trade better and focus on the process
and the real numbers behind their method instead of just keep throwing trades at the wall and
hope that “something” will stick.

Solution: Focus really hard on not losing first, breakeven second and winning small but consistently third. This way one could stabilize the returns not just in a way of numbers but also in stabilizing
the psychology behind the trading. Seeing smaller but consistent wins truly makes a big difference
in a way a trader takes traders, focuses and hopefully enjoys the whole process.

This subject brings me to memories of traders I came in contact with in my career who rarely analyzed
their outcomes and just kept focusing on the next trade, in effect generating more hope, kept
the traders’ juice up but in reality it only kept bringing more losses from period to period, generated
more trading costs, more grieve.

The crazy part is that trading can be simple and to improve the bottom line, one had to simply trade less, trade better, accept less, enjoy breakeven days like gifts and most likely have smaller then
expected but nonetheless green periods. 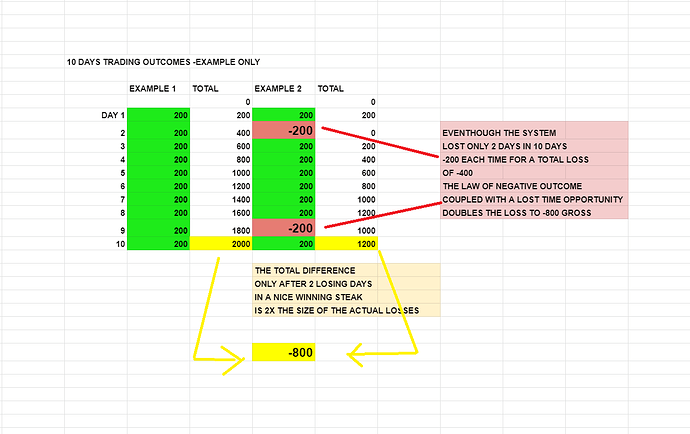 Thank you for this interesting perspective. I am not sure if I ever came across anyone who looked at losses as an opportunity cost. There is a lot of truth to that.
Your point shows (quite nicely) that when you act randomly, impulsive, and other feeling-based actions, you deprive yourself of looking at the market straight and potentially gaining.

There is a substantial risk of loss in futures trading. Past performance is not indicative of future results.

Just for clarity, in my last post I was making a very clear distinction between the damaging (or double damaging) effect of losses on trading, and while losses seem to be often overlooked and treated lightly while the focus keeps on just trading instead of analyzing the traders’ past performance which would reveal areas that need improvement.

The analysis of one’s P&L can reveal tons of information that is more useful
than most realize (only if looked at from an objective point of view).

I was able to “fix” broken (poorly performing systems) by just adding more aggressive breakeven modules. In fact it added just enough cushion to turn a losing system to a slightly profitable one in time-based performance measurement. How else can we measure performance?
When one asks how much did you make we need to specify at least;
the time period, % return on the initial investment and
perhaps with what volatility level did one achieve the result?
Clearly, time is omnipresent and simply can’t be negated.

And to your point @Mod-MattZ, trading should not be looked at solely in terms of time being the opportunity cost, but one can surely make a point that there are only so many hours per day, so many days per month that a trader can make their system work or not, and therefore using time to their advantage instead of just keep trading to make up for losses could make a trader more aware that taking only A+ setups (statistically as per their system, providing it is sound and well designed) could play a huge role in turning green for any given time period.
Then, based on my own research, learning to take breakeven’s instead of only losses vs. profits makes a huge difference as well, because good trades ought to push strong towards profit targets and not however around the entry zones.

There is statement I came across many years ago that states:
The risk in the market increases with more time being exposed to risk.
It is validated by the fact a very short period of price movement can be predicted with a bit more certainty then longer periods, simply because by reading the current Order Flow and orders being placed at the current time is could be indicative of a very short term price movement, but with any more time, a large order from across the world of finance can come and change the entire market structure that no one could every predict with any indicators or volume analysis. That being said, trading price prediction can be compare to the “weather man prediction”. A weatherman is usually very accurate when predicting the weather for now or the next hour or maximum a few hours.
But when asked to predict the weather a few days in advance the prediction rate drops dramatically. Again, time factor.

Finally, ff we didn’t have bills to pay, and all kind of time-pressing obligations,
we would probably trade more relaxed and not take crappy setups (because we are pressed by time to perform, here and now),
hence my post about the double damaging effect of losses in time sequence.

That is what I meant by using time as an opportunity cost.
And yes, one must trade their best strategy and not deviate from it no matter what, but using time analysis to built or improve one’s system is what I suggested.