Hold onto your butts everyone! This is gonna be a long one!

So I’ve been wondering about this for a while now, especially since I have been absent from the forum for some time now, but has there been any consideration as to starting a thread dedicated to reporting bugs or potential glitches that may have a potentially easy resolution?

If not, I have a few bugs/glitches that I would like to report.

All of the following issues have presented themselves in the simulator. I have not noticed any of this with live trade data, but full disclosure, I’ve yet to finish funding my account, so I have only been using the Simulator. I do however use/watch live data after my trading session is over for observation purposes. These bugs/glitches seem to be almost random and will sometimes only happen once or twice for like a month and are resolved by just restarting the Sim. If that doesn’t solve it, then restarting the platform usually does. There is one that started just a couple of days ago but appears to be relatively consistent. I’ll explain them to the best of my ability as well as post images to provide visual reference.

This one is intermittent, but extremely vexing if the price action and order flow are really moving. It makes placing any kind of order problematic since I am not sure where or if it’ll be executed. This one is usually solved by restarting the Sim, but occasionally a full platform restart is required. Again, extremely vexing, especially with the Sim since I would have to export my trade data and make note of my current P/L, equity, and balance since I’ll need to adjust my balance before I restart the Sim to stay as current as possible.

What appears to happen is the spread widens drastically and continues to do so, stay at the level it is until a restart, or will eventually come back together but will do it again. This may be an issue with Rithimic, but I’m not sure. Here are the images to demonstrate. 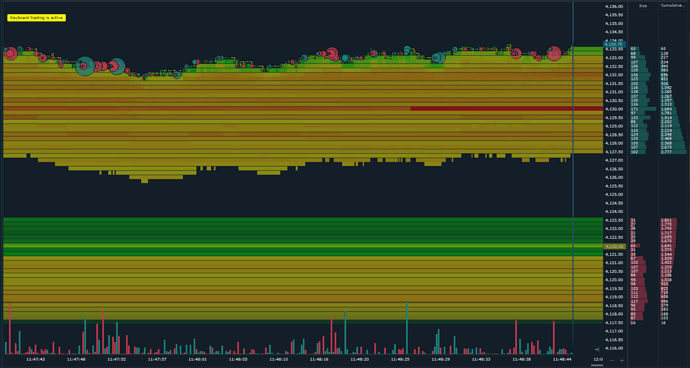 There are also times when the resting orders above or below where the last price is trading completely disappear. The images provided are of the upside. You may also notice that some of the levels will show up as the price moves up and down and that there is a base level that will stay consistent regardless of the price action. However, when the price moves above or below where these levels are, the only thing that prints is the levels within the price action as you can see in the images. I hope i explained that well enough.

These never return unless I perform a restart. 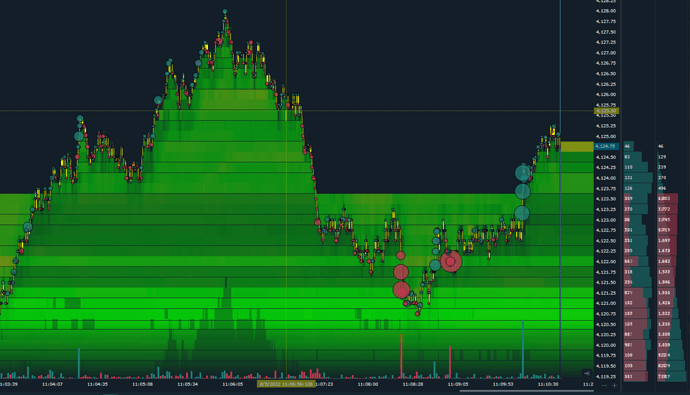 Also, if you take a look at the right side of the Surface DOM you can see that the resting orders and cumulative orders have become overlapped. This issue also will not resolve itself until a restart. 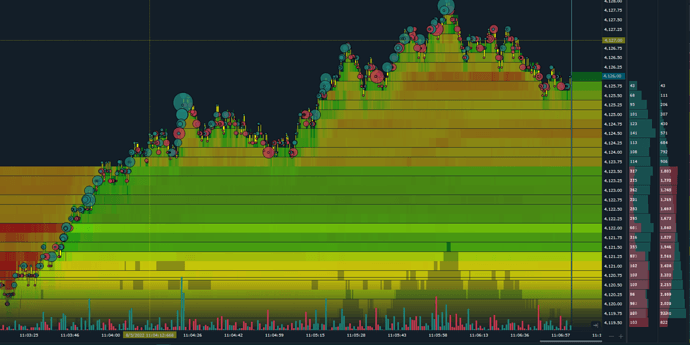 This next 2 images is an issue with the DOM Trader and it does sometimes resolve itself, but that is a fairly rare occurrence. This will sometimes happen when the aforementioned issue with the Surface DOM occurs, but is usually a standalone experience.

What happens is that the DOM will act like the spread is widening like some lower liquidity products will after the market closes and reopens. but it usually just continues to widen. Like I mentioned earlier it does sometimes resolve itself and come back together, but that either takes a very long time or doesn’t happen at all until a restart. In the second image you can see that I have Level 1 data at the top of the DOM and it is indicating that the spread is 1 tick. This is true if I look at a chart of any variety, i.e time, tick, volume, reversal, etc. The issue lies solely with the DOM.

I have my DOM setup in such a manner as so that I can watch the orders build up at a price level that I believe is important as well as the imbalance in the order flow to the right of the price. I also have it set to auto-center because it make it easier for me to keep track of where my levels are. The aforementioned “experience” becomes extremely inconvenient because I do occasionally use the DOM for order placement, but I generally use it as a confirmation tool.

The last issue for this post , at least until I come across something new, is an issue with the Trades panel that only started happening late last week. It seemed to be random at first but has developed somewhat of a pattern. What happens is that usually when I have a trade completed, regardless of order type or execution, it wont show like it was completed. Instead it shows like another order was opened at my TP, SL, or if I manually closed/flattened the order. Most of the time this happens with the first and maybe second order, and then prints like normal. I will sometimes get the rest of the trades printed normally or there will spaces where this bug/glitch will happen. However, my balance, equity, P/L, and fees WILL update and show the correct data. This isfrustrating because I constantly export my trade data throughout my trading session into Excel because I have a running spreadsheet built on monthly data to track my stats since with the license that Optimus graciously provides us for the journaling software will only hold 250 trades at a time. Though it is really nice to be able to see your performance nearly instantly when you export to the journal.

Below are the last 2 images for this post and then I’ll yield the pulpit to anyone that has experienced any of these issues or something similar.

The first one is a screenshot of the Trades panel of my 1 trade from yesterday that not only hit my daily profit target, nearly exeded it by double! I was quite proud of myself for that trade. I did my research, watched the price action, came up with my plan, executed my trade, and hit my TP. Took a while to get there, but it got there nonetheless. But you wouldn’t know because no data was recorded.

The second will be a screenshot of trade data exported from Optimus Flow for one of the days from earlier in the week that had more than one trade. The spreadsheet has some details highlighted as well as additional to further point out the issue.

ANYWAYS…
I hope I didn’t bore everyone to death with my longwinded short story of a post.

Thanks for coming to my TED Talk!

Hi @Daedalus. I am experiencing the same issue you are with the Trades pane not showing any P&L or fees. I’m currently evaluating Optimus Flow using the 2 week free live Rithmic feed so wondering if that has anything to do with it. Regardless, it’s a bit unnerving to execute trades and not have any P&L tracking if I’m going to potentially trade live with this platform at some point… @Mod-JakeM - any idea why this is happening?

I’m well past the free trial and am nearly done funding my account. I have every intention to use Optimus Flow. Is the issue inconsistent and seemingly random like it is for me or a pretty constant problem?

I do absolutely love the platform though, regardless of it’s flaws. Jake, Matt, the Devs, and the rest of the team are simply incredible. They work so hard to address any problems that arise as fast as possible. By far the best customer support. So I’m sure they’ll address it as soon as they can.

Thank you for your very detailed and thorough post, we appreciate all of your feedback and for bringing these matters to our attention 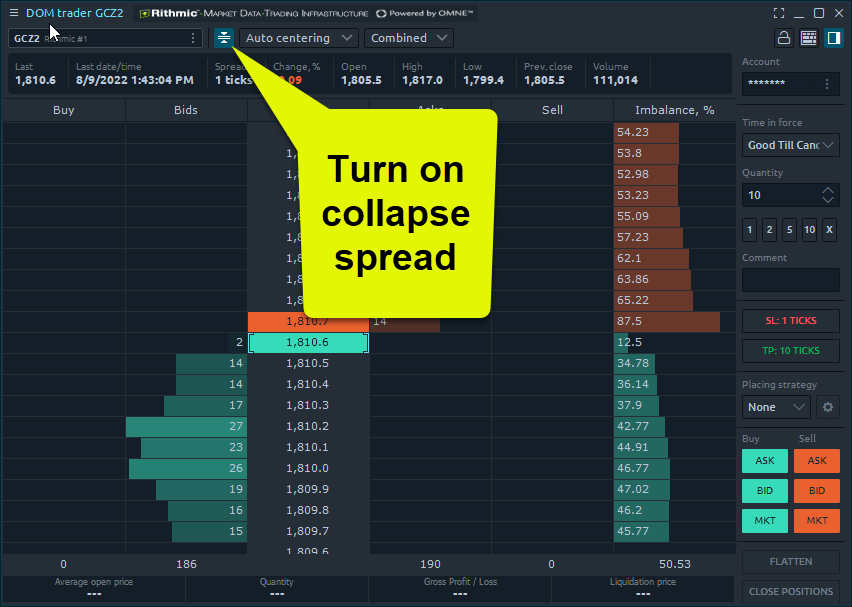 While we work on a fix for historical trades not displaying PNL for Rithmic users, what I can suggest as an alternative is to use the R Trader or R Trader Pro platform at the end of the day to pull in your trades using the Recent orders feature. Once you export your trades into the journal, you can manually edit the PNL after the fact. We even have an option to export a CSV from R Trader into our journal if you’d like.

Another alternative is to use your daily statement once you go live to track your PNL. Your daily statement will list all trades and PNL that occurred on your account that you can also use to manually edit the journal. I know these alternatives are not as convenient as simply clicking the export to journal button within Optimus Flow, but while we work on a solution these two methods should suffice.

Thank you both for your feedback and posts. @Daedalus feel free to try the method above I mentioned for #2 and let me know this works. Feel free to provide more info on #1 as well so we can attempt to replicate this issue.