Hello Community,
I am in the process of building a trading journal. The initial launch will be free and I will do my best to keep it free as long as it makes sense economically.

Your input is required. What would you like to see in the Journal? What sort of features, stats, and other things would help you in your journey? Although we have already submitted the original software to the developers (prototype gen 1), we will make an effort to add features if they deem to help the entire community.

Please do “cut and paste” while googling other journals. I am looking for input that comes from your directly because whatever comes to mind would be most useful as opposed to piling up features that no one uses. Software costs a $%^& load of money and the development, so please keep that in mind.

This is a coincidence because I just started writing my own journaling software a few weeks ago. I haven’t found any existing software that does what I need.

Here are my primary requirements.

The most important statistics for me are MAE and MFE:

Ability to record all stop and tp movements:

Thank you for these insightful points. It would be hard to implement all, and when you deal with programmers you need to provide direct input that is at times almost binary.
It all boils down to what parameters to use when programming.
I do agree with you that trades need to come in in real-time. We will work with the API providers to achieve that.

Creating a plug-in for existing trade software should be trivial. That said, I’ve been a software developer and systems architect for 40 years, so maybe I have a different perspective

I’m writing mine in SierraChart as a Study because I really like their API. But I think Optimus Flow has a .NET API that could be used? I haven’t looked at it, but it might be something to consider.

I have already mapped out how each of the above functions would be implemented. For every order that is filled, a marker is placed on the chart. I select the marker and press a hotkey and that allocates the order to a trade group.

I am trying to design the UI so I don’t need to leave the trading platform to journal anything; it is all done from the chart I’m trading from. It doesn’t interrupt flow, and more importantly it requires me to think about documenting exactly what I saw to enter the trade on the chart. I can add notes, and if I want a hard copy record, can create a .pdf of the screen as I see it with the relevant markings. I don’t think this would be possible with a separate journaling system.

I am comfortable using SQL or Excel for analysis, so I don’t plan on writing a fancy graphical front end for analysis. If I decided I did want the stats to look fancy, I would probably use Edgewonk, but via a manipulated export that accommodated my trade groups and completed MFE figures.

Our journal will be web-based and would connect to the APIs in a live manner over time. The reason we want it we based is because I want traders from all platform to get help on analytics.
If we could cooperate on Flow, it would be great. I could ask the team to provide you with an API.
It does use .Net API C#

If there are indicators/displays that are written to Optimus Flow by community members, we would not charge for it and make it available on the free version (if we decide to take it to production).

Yes, that would be good. In that case, the most important thing your journal can have is an open API. That way your userbase can extend your software and integrate it directly into their preferred charting platform.

It would be great to have an API that allowed me to add/delete trades in real time. This way I could have my study push the trades into your system rather than your system pulling the trades from Rithmic.

The following data recorded per trade would allow me to provide the analysis I think is important as a trader:

List of Order Fills Only orders (in and out) that were part of the trade. This would allow scale-in/scale-out trades and would mean I could take separate interim trades that would not alter the stats on this trade. Those interim trades would be logged as separate trades.
Viable start time of the trade Typically this would be the end datetime of the first signal and the very first point in time that the trade should have been entered. This allows me to keep track of how quickly I pull the trigger on a trade.
Viable end time of the trade The maximum time I want to be in the trade, regardless. For example, this could be the datetime of the end of trading day, or the datetime of 5m before an interest rate announcement, etc. This allows potential MFE to be calculated and can show if I’m cutting trades too early.
MAE during trade This should be based on the average scale-in and scale-out prices.
MFE during trade This should be based on the average scale-in and scale-out prices.
Potential MFE if the trade was allowed to run to the viable end time. This shows if I am cutting trades too early.
Potential MAE required to reach Potential MFE What was the MAE that would have been incurred for the trade to reach potential MFE. This shows the optimal position for where a stop should have been.
Playbook A list of user-defined setups. For example, inside bar break.
Self Critique A list of user-defined self-analyses of the trade. For example, got nervous and moved stop to break even too early. This shows any recurring psychological issues.
Entry timeframe in secs The timeframe I was trading on, for example watching for setups and initially managing the trade on a 5m chart. This allows me to see which timeframe I’m most profitable on over time.
Higher timeframe in secs The timeframe I was watching above, for example I may be entering and managing the trade on a 5m chart but watching a trend on the 1H or Daily.
Identified trend on higher timeframe Indicates whether I am entering with or against trend on the higher timeframe, and allows me to pull statistics on the success of each, and the MAE expected on a with-trend vs countertrend trade.

On a slightly different topic, I tend to think of MAE and MFE in price movements, irrespective of my position size. So if I was in 5 contracts and price moved against me 4 ticks, I would think of this as 4 ticks MAE rather than 20 ticks MAE. The idea is that as I increase my position size over time, my MAE and MFE would remain consistent. However, Journalytx (the software I currently use) always shows the combined qty (20). I can understand from a risk manager’s perspective he would be interested in total qty MAE, but I’m not sure it helps the trader.

If anybody has any thoughts or advice on this it would be good to hear.

Matt,
Curious to know how this project is coming?

The project was initiated and we are in full force as far as development.
I assume that within thirty days would be release for Beta. In the meantime, as soon as I have some screenshots I will post them to the community.

Thanks Matt! Much appreciated!

Update
In developing my journal software, I have decided upon the following terms and class structure for the API.

Journal - This is the highest level object and contains all data for all time.
Playbook - a collection of strategies.
Strategy - a type of trade idea, e.g. a chart pattern, type of order flow, or other event that may be tradeable. A strategy may require a certain type of market condition to be valid.
Market Character - Classification of market conditions.
Opportunity - When a strategy has been identified.
Orderfill - Orderfills are allocated to an opportunity.
Session a defined period of time that neatly groups opportunities for review. For a daytrader, this might be 0930-1600 for each trading day.

Here are the initial metrics I want to collect per opportunity:

Before placing the trade:

Once the opportunity is finalised:

Analysis during and after the trade:

The plan is to enter this information within a few seconds; it should be no more than 8 mouse clicks per opportunity and should form part of the natural trading workflow. However, it has to be done immediately. I think I would have forgotten the details if I waited until the end of the trading day to enter the information. The exception is point 6 (Mark of reasonable start and end points for an opportunity) which is best entered upon review with a clear head.

Hello Matt,
How is this project coming along? Any updates?

Hi @mdel60,
We have finished the functions we want for the journal. Now the challenge is to make it web-based and make sure the functions work on the web (HTML, etc).
I assure you that the team is working diligently to make it available soon.

looking forward to it

We would like to thank all of you who have contributed to this post for your feedback and suggestions in regards to the trading journal software we have been developing.

We are pleased to announce that our trading journal has now officially launched and can be accessed via the following link: https://journal.optimusflow.app/dashboard.

This product is FREE to all funded clients of Optimus Futures. We are also pleased to announce that all funded customers now have full unlimited access to the Optimus Flow trading platform.

We’ve created a video tutorial on how to access, use, and integrate our new trading journal with Optimus Flow here: 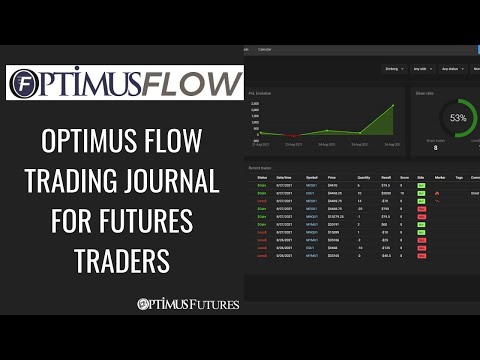 The trading journal does work with other platforms as well. In its current state, we currently have the option to import trades from Sierra Chart and R Trader Pro. Users also have the option of importing trades manually or through a CSV file. 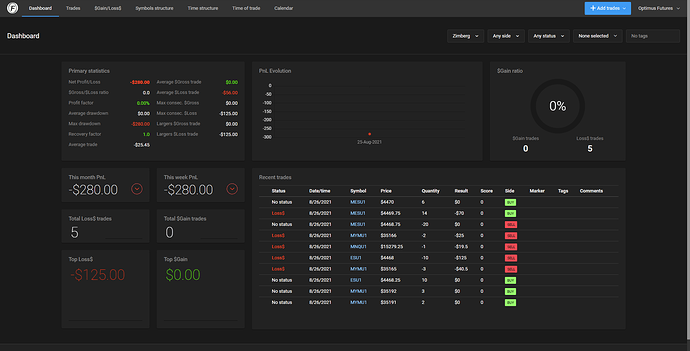 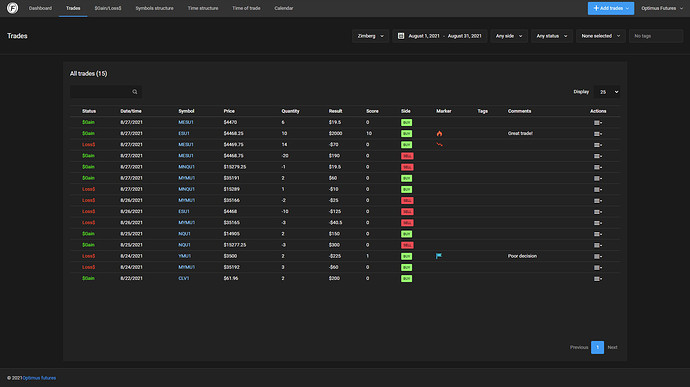 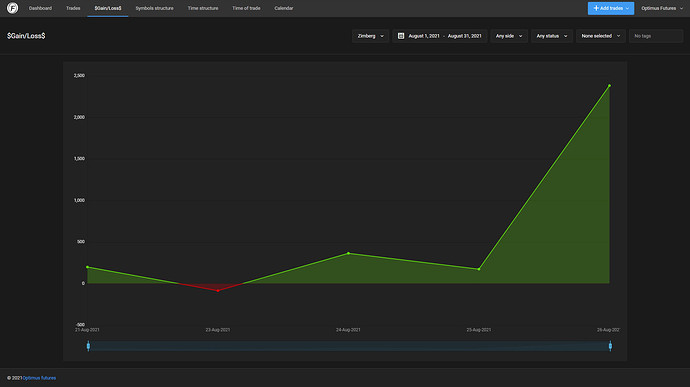 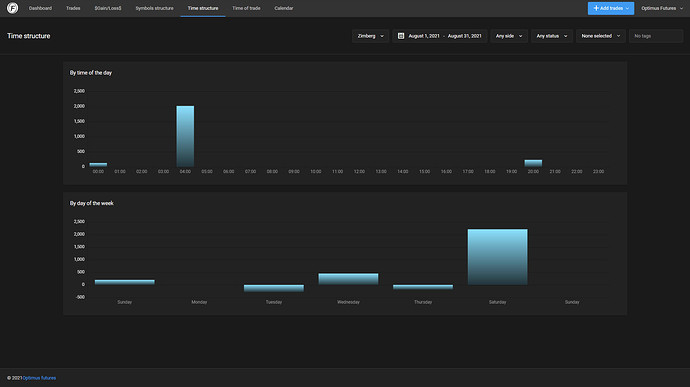 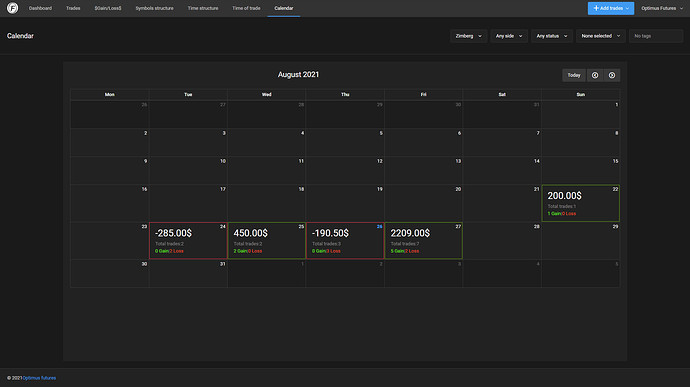 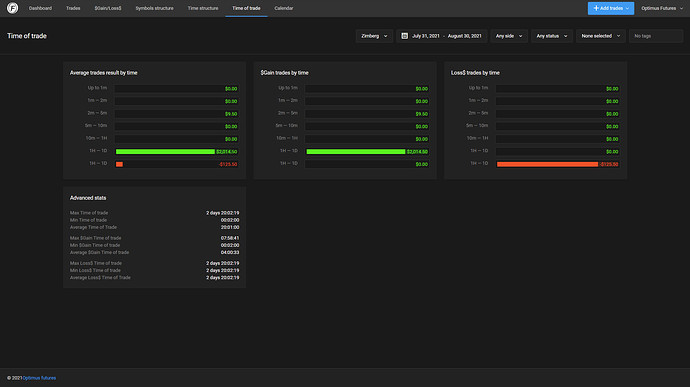 If you have any additional feedback, suggestions, or comments after using the journal please let us know! If you are having any trouble accessing the journal or need help getting started, please leave us an email at: support@optimusfutures.com.

We hope you enjoy our new product and please let us know your thoughts!
Thanks,
Jake
Optimus Futures

Thanks to Matt and the Optimus gang for this! I can’t wait to check it out!

Just imported the day’s trades into the journal. Should I see P/L for the day and totals in the rows?

Im new to trading but here a thought that came to mind.
Ive heard soo many traders say 80% of trading is psychological.
Perhaps, include stats on psychological behaviours?
eg. mood before trading, mood before taking a trade - calm, slightly anxious, angry etc.
Was there anything going on in yr life that was clouding yr perspective on life before trading?